This current college football season is far from over, but the current HOME football season is over for my beloved Clemson Tigers. I must say this past Saturday (11-12-2011) was an outstanding day full of emotions from one extreme to the other. Sure I may sound waaaaaay over the top with my thoughts considering all of the other more serious issues going on in the world, the country, the college football world, and my life. But dadgumit, this is my blog and my emotions. I can feel da way I want to feel and express it how I see fit. But anyway, back to this past Saturday. . . .

Early in the summer I was blessed with news stating that I would be able to attend ALL OF THE CLEMSON FOOTBALL GAMES this year. Now granted, I had already made my mind up that I would try to attend at least 1 and if able, more games. But it was always on the whim of scalpers and child care. My sister, Sheena, has grown into a big Tigers fan and ordered tickets for herself and. . .FOR ME. I still remember getting da text message and how pumped I was when I got it.

My sister and I have experienced some GREAT times this season. At one time I teased her saying she got me the tickets this year so I could be her personal taxi and body guard. (which still may be true. lol!) I look back at the season and realize that she would have been TOTALLY LOST at times if I wasn’t around. Whether it’s finding descent parking, or navigating to tailgate spots, or even what she shouldn’t be drinkin’. (I’m da only boozer of da family apparently) Or even stopping her from walkin DEAD INTO TRAFFIC because she “soooo needed to get her sleeve cleaned off”. (smh)

I’d like to take a moment to reflect on a few items of this past season.

1. This was da first season where I saw a game with my sister and da Tigers DID NOT LOSE. We had a TERRIBLE losing streak together and I told her I didn’t want to see anymore games with her at one time. 🙂

2. We hung out da majority of da time with my sister’s doctor friends and associates from her job. They were GREAT people. Very welcoming (as all Clemson tailgaters) and fun to be around. I ate soooo much (and drank quite a bit). Many thanks to Dr. Greg and his wife Bridgett, and the many others that INSISTED we hang with them. 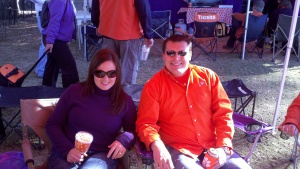 3. The #ClemsonBCTweetup was OUTSTANDING. My sister was able to meet up with other people on Twitter that we both follow. I had attended a previous tweetup last year. We had a great time just being ourselves, enjoying everyone’s company, and loving our favorite team.

There were some games that were freakin’ HOT due to kickoff time. There were games that were not so bad regarding weather. But regardless, each game was jammed packed with great fans as passionate as da two of us. It was nice knowing we had about 4 people each time LOOKING FOR US to be there.

Now, I’m proud to say that there were a few “absolutes” of our Clemson football home season journey.

-People were going to ASSUME that my sister and I were dating. Whenever general convo came up, we always got looks and remarks as if we were boyfriend and girlfriend. ALWAYS. I consider it an ego boost because apparently “good lookin” genes run in da family. 😉

-People were going to assume that I formerly played at Clemson. I told people several times that I blew my opportunity to play there. Some of the more. . .”happy” people wanted to argue with me and tell me that i DID play at Clemson. Funny stuff.

-Our dad would ring my cell phone as if I EVER answer my phone on football saturdays and leave a voice message of random praises to God or other mumbling rants. It’s funny because he and I discussed that he should NOT call me because i ain’t answering da phone. 🙂

-The drive back to Anderson would always be fairly smooth and I would hear my sister’s cell phone vibrating a 100 times while she dozed off in da seat next to me.

-My voice would be gone until approximately Wednesday following the game due to yelling for damn near 3 hours.

I enjoyed every one of those “absolutes”. But there was one more thing. . .WE DID NOT LOSE at home this year. I’ve NEVER experienced that and I shall never forget it. This final home game was such an emotional time with me considering my other life battles and my love for my “first love” (football). As da seniors were running down da hill da last time, I felt pride for them and a tear of joy stream down my cheek. As da remainder of da team ran down da hill for da last time in 2011, my heart rate increased, my voice raised, and my adrenaline was jacked! It was awesome. It was GAME TIME.

I want to say THANK YOU to my lil’ sister, aka baby genius, for providing me this opportunity this year. It meant a lot to me as a fan and for me to see da insane times we had together as siblings. It meant even more knowing she NEEDED ME there each weekend. (she told me that in a text) I am truly blessed. I thank you and I love you. We just gotta work on you losing some of that “hollywood” you got goin’ about you and your attire. 😉

Check out some final pics from Saturday. A few are some really nice HDR pics. Thnx for readin’, yall.

6 thoughts on “A Joyous, Yet Sad Occassion For Me”